Walking with Whales – join this exclusive tour and see breaching humpbacks from the best vantage points in Australia.

When Australian Geographic named Eden #1 on the Top Ten Australian whale watching destinations, it didn’t come as a surprise to the locals around here. Whale-watching during the southern migration of these majestic leviathans of the deep is a phenomena that residents on the Sapphire Coast take in their stride. Yet there is a barely concealed pride in gaining this official recognition by a respected organisation. Undoubtedly the most famous of whale watching operations in Australia is Cat Balou Cruises which has operated out of the port of Eden for over 27 years. Ros and Gordon from Cat Balou can vouch for the ever-increasing number of whales; one day last year broke all the previous records – 72 whales through a 24 hour period.

But what’s even more amazing is that you can often – and we mean often – see whales from the shore on this stretch of coast. And the Light to Light Walk is a perfect vantage point.

Humpback whales migrate north around July to breed in the warm waters around northern Australia. As the water warms, they begin their southern migration in time to arrive off the Sapphire Coast from around mid September till the beginning of December. Traditionally, we don’t expect to see many humpies on the northern route – they seem to follow a current that is well off shore, coming closer in just south of Sydney. But in the last few years, there are more sightings in July/August than ever before.

This is one of the few places outside Antarctica that humpback whales can be seen feeding on krill and other small crustaceans.

Researchers such as Dr Kylie McKenzie have studied humpbacks in and around Twofold Bay for several years, with support from the Sapphire Coast Marine Discovery Centre. These people see whales all the time – but they speak of their experiences in Eden with awe – watching a massive humpback whale expand the pleats around its throat and swoop through a school of krill is a sight to be behold.

Walking this coastline during the southern migration is very likely to result in at least one – and probably many more – viewings of whales either diving, breaching, tail slapping or pec slapping. Our tours offer a quality set of lightweight binoculars to ensure you get a great view.

“The best place for land-based whale watching? Green Cape. Without doubt. Keep an eye out for seals, too. They’re pretty funny to watch – copying the whales when they breach.”

Be amongst the first to take our newest tour – the Light to Light Whale Watch Tour – from Friday 10th November – Sunday 12th November (inc.). This is our usual 3 day/2night tour with an extra night at Green Cape Lighthouse cottage – the best vantage point on the coast for land-based whale watching.  This tour is an exclusive.

There are only 4 places (2 x twin share) available.  It will sell in a hurry. Book here. 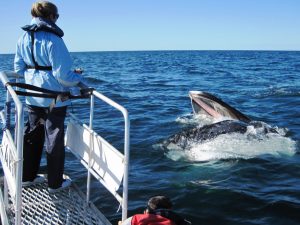