Vivid In The Bush – For Those Who Like Their Colour Naturally

The Vivid Sydney Festival, held annually in May, is the place to be when you want to immerse yourself into a vibrant city scape with bright lights and lasers putting every sense on edge. There’s no denying it’s stunning – light shows that dazzle with their artistic choreography and technological advances.

But we reckon the Light to Light Track offers just as many opportunities to see something vivid – and in this case, every colour is natural.

Rocks dating back to over 300 million years take a constant battering from the sapphire-coloured waters. The colours of the rocks range from pure white and glistening crystals, to soft pinks and greens and to a deep deep red and even a gunmetal grey or black.

But there are certain sections of the track that we have discovered that are so spectacular you must see them to believe they are naturally created.

One of the many sea caves on this stretch of coastline has been aptly named ‘Rainbow Cave’ by one of our recent customers.

We sought some expert advice from Dr Anne Felton, a respected locally based geologist, to ask how and why the cave is so colourful. Anne’s description paints a very clear story of how this amazing rock came to be:

The age of these rocks is Devonian – about 390 million years old. These ancient rocks are exposed along much of the coast between Merimbula and Green Cape. They consist of pink sandstone and red mudstone, representing river channels (sandstone) and floodplains (mudstone), parts of the very extensive river systems across the continent at that time. 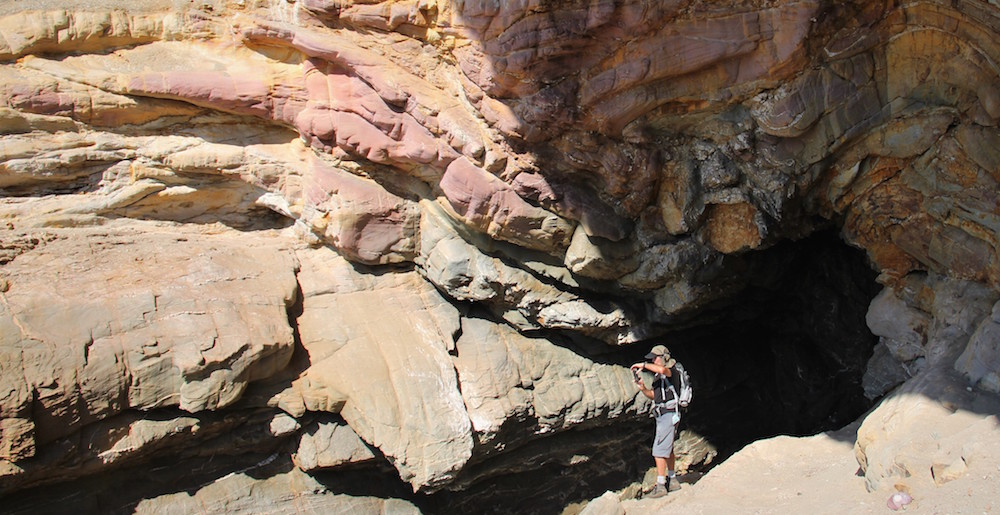 The rocks exposed in the cave are mudstones, crisscrossed by fractures. The red colours are due to iron oxides (rust!), and were developed in muddy floodplains as iron-rich sediments dried out and were exposed to weathering in an intensely arid climate.

The blue colours developed patchily in the subsurface muds in response to localised chemical conditions in the ancient groundwater that altered the iron minerals to a ‘reduced’ (non-oxidised) form. ‘Reduced’ iron minerals are greenish in colour.

The red and greenish colours tend to follow the layering in the rocks, a geological clue that the colour changes are an ancient feature. Amazing that they survived for nearly 400 million years!

The yellow colours can be seen in both the red and greenish rocks, again a clue to when they formed – recently, not in the remote geological past. These colours are due to modern groundwater percolating through the rocks, depositing hydrated iron oxides (yellow colours) on fractures.

A true rainbow of a cave!

Book a Light to Light Camps tour and we can show you how to take yourself back to the age of fishes and gain access to this amazing geological story!